“organizations which design systems … are constrained to produce designs
which are copies of the communication structures of these organizations.”
M. Conway

Mono-repository in software development is a very popular way of organizing the source code and collaboration around it. It has some pros, like easy refactoring or dependency management, but it also has some cons, like a very high level of coupling between components (of course these statements are debatable but this is not the point of the current post). Some IT giants, like Google, Twitter or Facebook are still using mono-repository but this costs them quite a lot, just look at the new build systems like Bazel or Buck, they were invented to minimize the effort required to manage a huge pile of code.

At the same time, there is an alternative approach of making big products still having the projects distributed across multiple repositories. One of the benefits here is “loosely coupling” that leads to very easy scaling.

Practically not much of the projects are started already being split into modules and stored separately. In most of the cases it is a single repository that is growing until some point in time when the decision to split is made. But until this moment it is already a lot of work has been done. In case if the previous history is not relevant and can be neglected it is quite a simple task to make a split: move modules to the new location and tune CI accordingly. But in case if there is a need to preserve changes history and have it relevant to the content of each new module it becomes a non-trivial task, but (spoiler!) still possible to be performed quite fast.

Here is an abstract project with two logical modules: user-related and guest-related. Both are represented by four directories inside the repository. Ideal plan to separate those modules would be following: 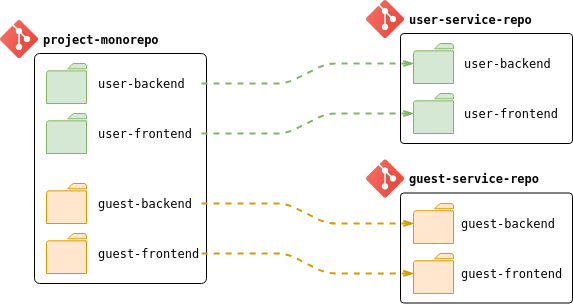 Brief Summary of the Split Process

The guide presented below follows the next steps for each of the modules desired to be extracted:

So, to have two modules being moved into a separate repository this guide must be executed twice.

Assume there is a git history of some project. For simplicity it may look like this (recent commits are on the top):

This example includes commits where the modules from different target repositories were touched, for example the most recent one:

It includes both, “user” and “guest” frontend modules. Ideally would be nice to have a content of this commit describing one or another module only, depends on the target repository.

git has quite a lot of possibilities for history manipulations. The most convenient one for this particular task is filter-branch1 . It allows rewriting of the commits log with the help of different filters. Plus it can change the files structure or even execute shell commands on top. Official documentation gives the whole list of filters together with behavior description, but within the current guide it is enough to use only one: subdirectory-filter. In short, it cleans up the content of the repository and related history and removes everything besides the specified directory. In the end, it also unwraps the directory and makes it a root of the repository. prune-empty flag forces empty commits (they may appear after history cleaning) to be removed.

After the command is being executed here is how the repository will look like: 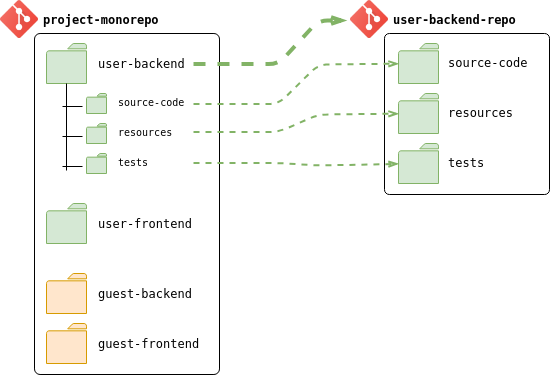 Commits history is being adjusted accordingly: only commits that are related to files inside user-backend folder are preserved.

The major benefit of using subdirectory-filter instead of index-filter or tree-filter is that it works super fast. The latter two filters have to check the whole history whereas subdirectory-filter just looks at the history of the directory and the rest is just ignored.

The major downside here is that only one directory at a time can be processed.

After the module is isolated the repository structure must be adjusted. Logically there must be a separate directory where the content must be placed. Maybe some descriptors for the module must be written, etc. After this is done the changes must be saved:

Now it is time to push changes to a new repository. First, the new remote repository must be linked:

And here comes a very important step: merge of histories. It is not required when the new repository is empty, because there is nothing to merge. The new module can be simply pushed without extra effort. But in case if the new repository is not empty and one of the modules has been already pushed there then it is not so easy to push something on top since git tracks histories quite carefully and will complain that existing history is not related to a new one. And push will be rejected. To resolve this problem those histories must be merged first. To do this, after the new remote repository is being linked, it is required to pull its content. But in this case git will complain locally with the same error about local and remote histories being unrelated:

To force pull and avoid this error the following command must be used:

Within this command git will require a message for merge commit to be provided. The commit is just regular merge, so nothing is changed.

Done, changes can be pushed to the new repository:

Now the steps must be repeated for every module that must be extracted. Note that source repository most probably needs to be checked out again, to reset changes made by filter operation.

After the steps above are done for both modules the history looks like this:

It contains only commits that are related to user-module. Interestingly, commit on the second position looks like touching two different modules. The content of this commit was already described and inside source repository it actually included two modules. But after the filtering has been done the new history should include only relevant information. This can be proved by looking into the content again:

Done. The repository has been split.