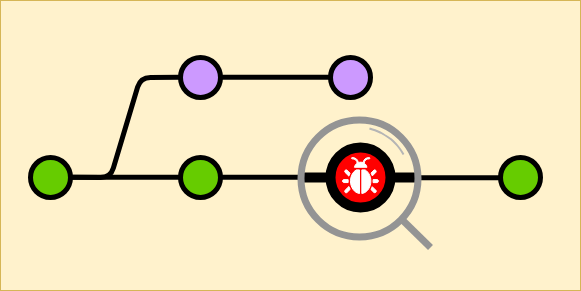 Testing shows the presence, not the absence of bugs.
Dijkstra

Apparently, software regression is a very nasty situation in the development process. It usually means that the last delivery contains something breaking. To overcome the situation the whole release must be analyzed. A developer has to write tests, rollback the changes, run tests, and … it is still there, one more step back in the VCS history and the error is still reproducible. And now this bug just got another additional label “legacy”.

Actually, it turns out that this functionality has not been used for a while thus the bug could be introduced not just with the last commit or two but quite some time ago. In case if the codebase is big enough it may lead to some significant amount of time to find an exact change that introduced this bug.

In practice, there is a way how to automate this search. Below there is an example of this operation within the Git repository.

The next example will illustrate the simplicity of the situation when the error in the software can be introduced.

Some financial software is in development. At some point comes a new task. The requirement sounds like this:

Full implementation history is available in the linked repository.1 But the key stages are described below.

To accumulate all the requirements service method signature may look like this:

So far it has no body, it is done by purpose to follow TDD.

Implementation is quite trivial:

Operations with big numbers may require some extra effort to get the proper result but in the current case it requires just a proper rounding. The mode that has been taken is “HALF_UP” and it looks pretty suitable in this situation.2

Now the code is working and it is time to add some documentation, do refactoring and release it.

At some point customer realizes that in the real world financial calculations are using another rounding mode quite frequently – Bankers Rounding. This mode is called “HALF_EVEN” and looks more suitable since it scenario.3

The change is pretty small: only rounding mode. After the change all the tests are still green, that may look suspicious but in any case it looks fine.

Spoiler: this is actually the place where the bug has been introduced, so in the commits history it is highlighted with [Silent Bug] label.

Another portion of minor changes, refactoring and release.

A critical bug appears in production.

In some cases the result of the calculation is wrong, the deviation is not big (around one cent) but it still exists and may lead to money loss.

In this case it is quite obvious what happened: software regression. The bug looks to be introduced with the latest release as it was not appearing before. The most common way of searching for the problem cause is going back through the history of commits trying to find a change that introduced the error.

The first helper that can be very useful here is a test for a particular scenario from the bug:

It is failing on the current commit. Then it is time to trace the history. But after checking out the commit before the release it turns out that the test is still failing. Now the whole debug session will take more time than expected: it is required to do a kind of binary search through the history of commits jumping back and forth trying to find a bug.

Git-bisect is a tool that helps to traverse through the history of commits searching for a particular pattern (code change, behavior change, etc). It works within a range between “good” commit (the one where the error still does not exist) and “bad” commit (the one where the error already exists). Both must be provided as an input to the git-bisect session.

Git-bisect can work in two modes:

Having in place a test that can help with identification of the problematic commit enables a possibility to run git-bisect in automatic mode. For convenient reading and understanding of the whole process below it is divided into logical steps.

Based on the commit history there can be made some predictions when the problem may occur. The last commit in the history can be marked as “bad” and the one around the release can be assumed as “good”.

The following commands will prepare the git-bisect session:

Git-bisect decides to start with a commit that is right before the one with a bug:

Now the session can be started in automatic mode:

After the first run all the tests run without failures:

And current commit is marked as “good”. 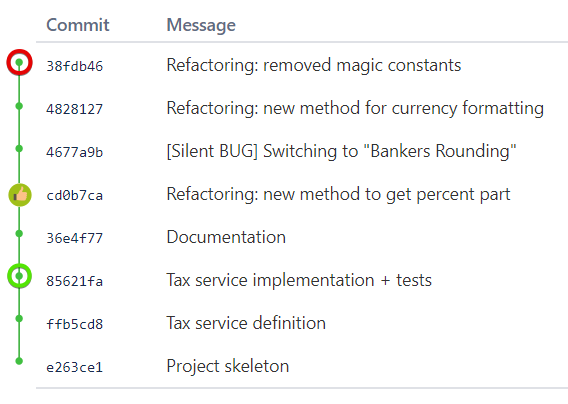 The new iteration is started automatically. Git-bisect picks another commit first, this one is right after the buggy one:

And now tests have one failure:

And this commit is marked as “bad”.

And executing a tests run:

This one fails as well. 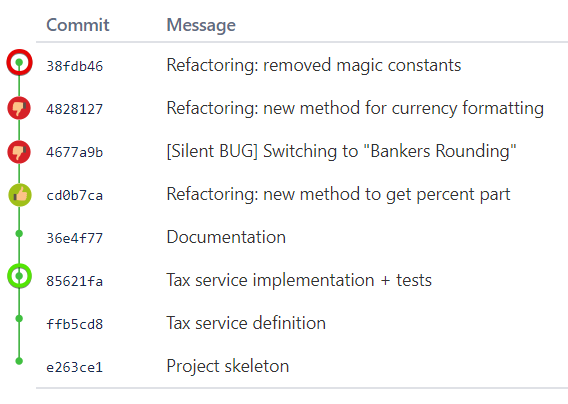 For now, the process is over, there is no more commits to check and it is clear when the bug has been introduced.

At the end of the session git-bisect gives a short report:

And this conclusion actually matches the reality, this is exactly the place where the bug has been introduced. 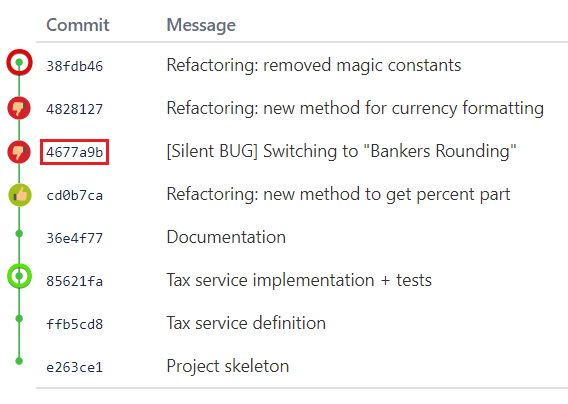 Git-bisect can be a very helpful tool to traverse through the history of commits finding some particular changes, not necessarily bugs. As an argument for “run” parameter it may accept any application or script that can execute the logic of making a decision about the branch state.